History of the Cooperative

Cooperativa Artieri was established in Volterra in 1895 with the name Società Cooperativa Industriale Magazzino di lavori in alabastro.

In 1908, the name was changed into Società Cooperativa Artieri dell’alabastro following Gabriele D’Annunzio’s visit to Volterra; we owe the name “Artieri” to this great Italian poet. 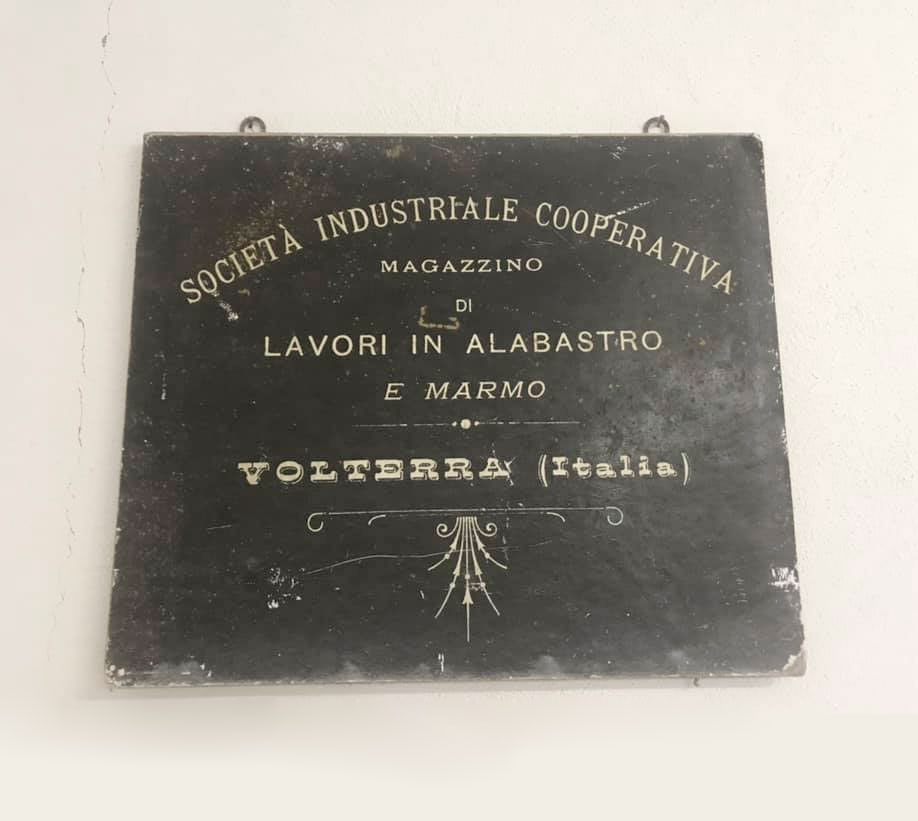 The Cooperative was established with the main purpose to allow alabaster craftspeople to have a warehouse for their products, ensuring the presence of skilled personnel in charge of following the work until delivery.

The idea of the Cooperative Society was born out of a project by Onorato Della Maggiora, a highly esteemed man in Volterra both for his love for alabaster and the experience acquired in the sector.

Already in 1894, the project presented as its main purpose the creation of a warehouse to which all artisans could sell their products and from which all traders committed to buy.

The association was motivated by the need to protect workers’ interests and to ensure greater product quality control.
The first founding members in 1895 were 472, with 35 apprentices.

The consolidation of Cooperativa Artieri in the early 1900s

With the election of Enrico Barbafiera as president, initiatives were taken to give the society an economic perspective by expanding commercial relations abroad. The Cooperative was considered to be well underway thanks to a new production that proceeded at satisfactory speed.

The years 1900-1910 proved to be very favourable to the alabaster market. In addition, during the Giolitti period (1903-1914), the government helped the crafts sector by giving production the right boost both on foreign and domestic markets.

Lorenzo Bresciani was president of the Cooperative from 1911 to 1924 and had to face the difficulties deriving from the outbreak of the First World War.
Profits suffered a serious decline in 1915-1916, but starting from 1917 they recovered rapidly. 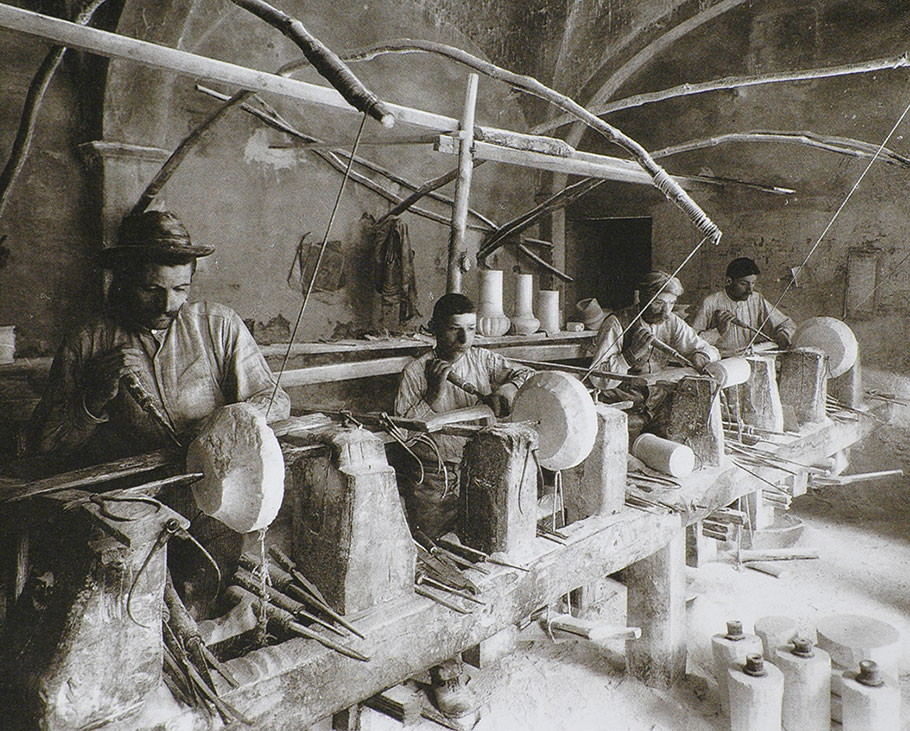 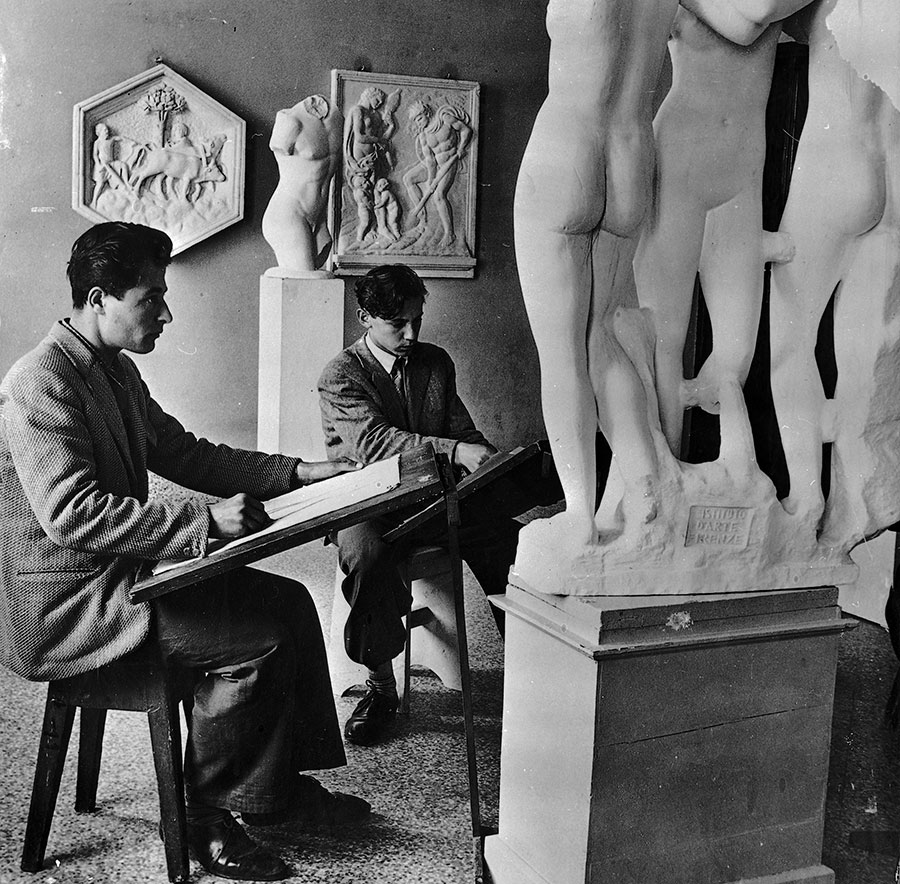 During the war years the Cooperative took some important initiatives, two of which are perhaps more noteworthy:

A new economically favourable period started for the alabaster sector and the activities of the Cooperative.

The 1929 crisis and Fascism

The 1929 crisis dealt a hard blow to alabaster processing.
At the same time, as far as Volterra alabaster was concerned, Fascism did not shun legalised robberies, extortion and the abolition of all forms of democracy.

The federal hierarchies kept a watchful eye on the changes and problems of Società Artieri as they believed that the cooperative was a hotbed of subversive activities, having been for many years one of the centres of the democratic life of the town.

In the years of the regime, the Cooperative lost its democratic freedom and faced serious economic and corporate decline due to the autarkic policy wanted by Mussolini and to foreign policy choices.

Despite all this, alabaster and its craftsmanship were displayed in the Italian colonies as an example of the industriousness of Fascist Italy. 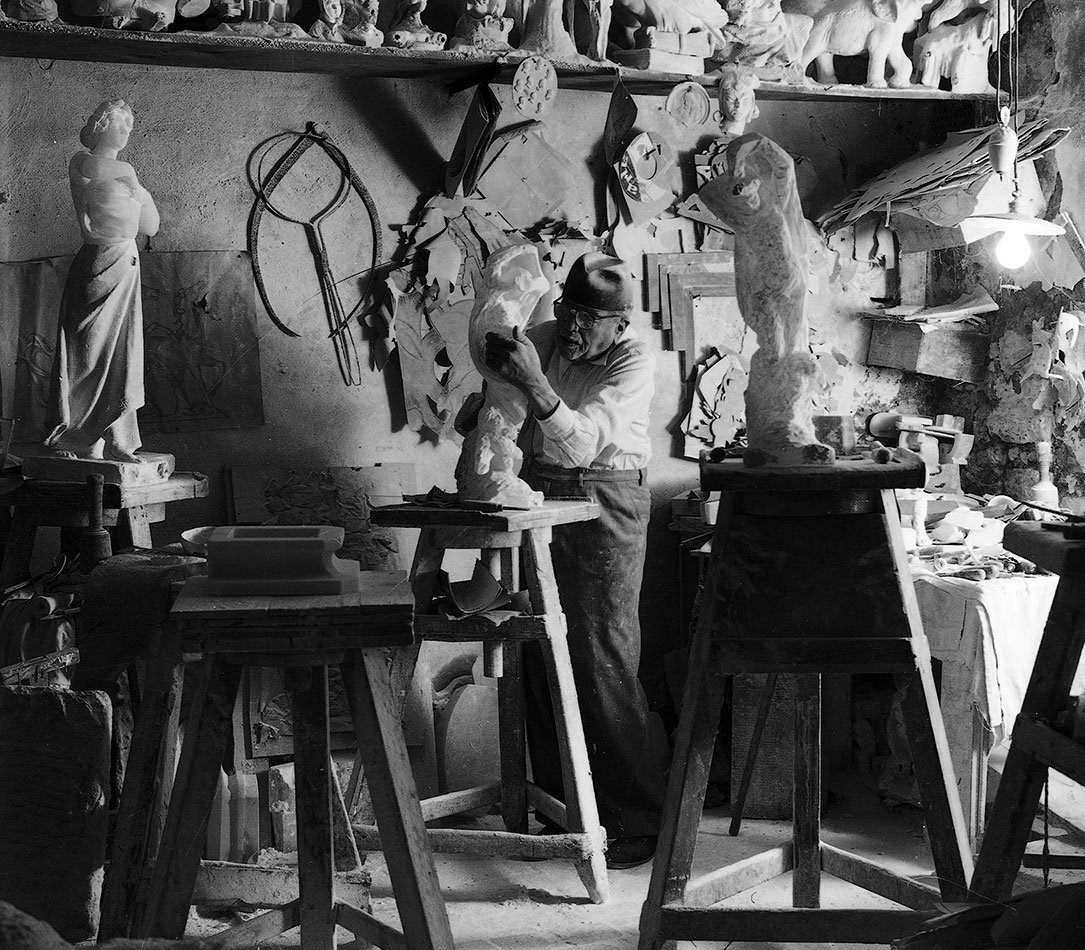 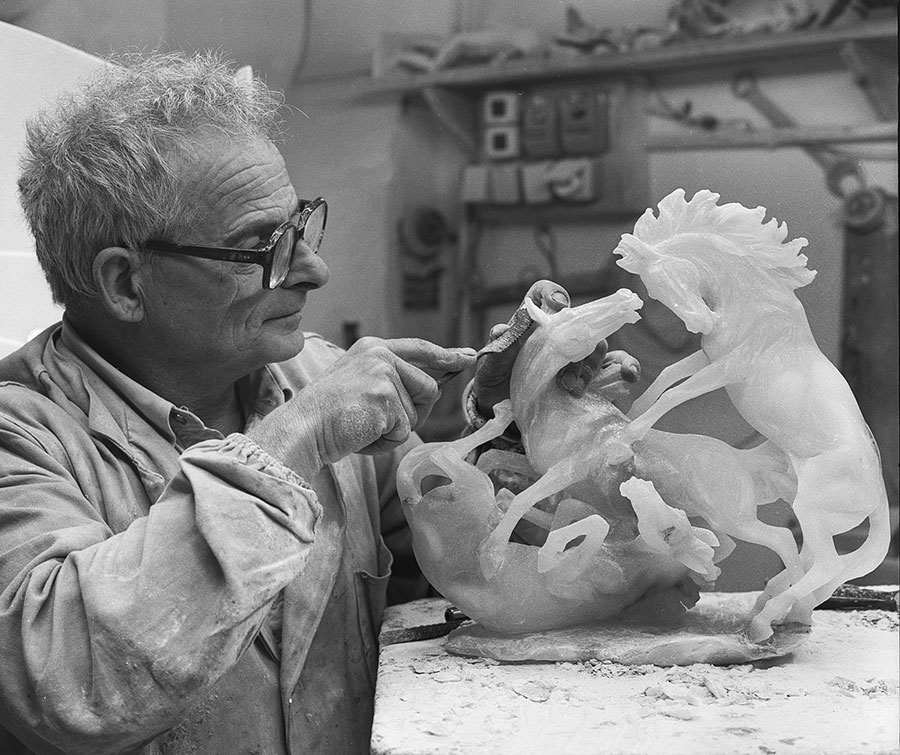 The fall of Fascism and the end of the Second World War returned the Cooperative to its members, its legitimate owners.

With the liberation army also came the first customers, the troops of the American Fifth Army, which commissioned the alabaster craftspeople to produce the coats of arms of their army.

Moreover, the soldiers purchased the small objects made of this extraordinary stone as souvenirs to take home. They were modest buyers, but thanks to these sales the Cooperative, which had its warehouses full of items produced during the war and left unsold, was able to regain strength and new economic momentum.

The years of the economic boom

In the immediate post-war period, the Cooperative counted about 185 members. The early ’50s proved to be a time of great economic prosperity for the Cooperative; the market, and the foreign market in particular, requested an ever-growing number of alabaster products.

The most important names in Design began to request collaborations and this is why Cooperativa Artieri can be considered the forerunner of Italian Art Deco.

The most important exports were directed to Mexico, Portugal and Greece, not to mention the United States which were, and still are, the main market for Cooperativa Artieri products.

Other significant business contacts were active with countries in the five continents: France, Germany, Scandinavian countries, South Africa, South American countries, Japan and Australia. The years of the economic boom also witnessed the opening of many shops owned by the Cooperative.

In Tuscany, in addition to the two shops in Volterra, there were also shops in Pisa, Siena and Florence.

A big step was taken in the early ’60s, when Cooperativa Artieri took over the Limonex shop in Paris and made it an exclusive retailer of its products. 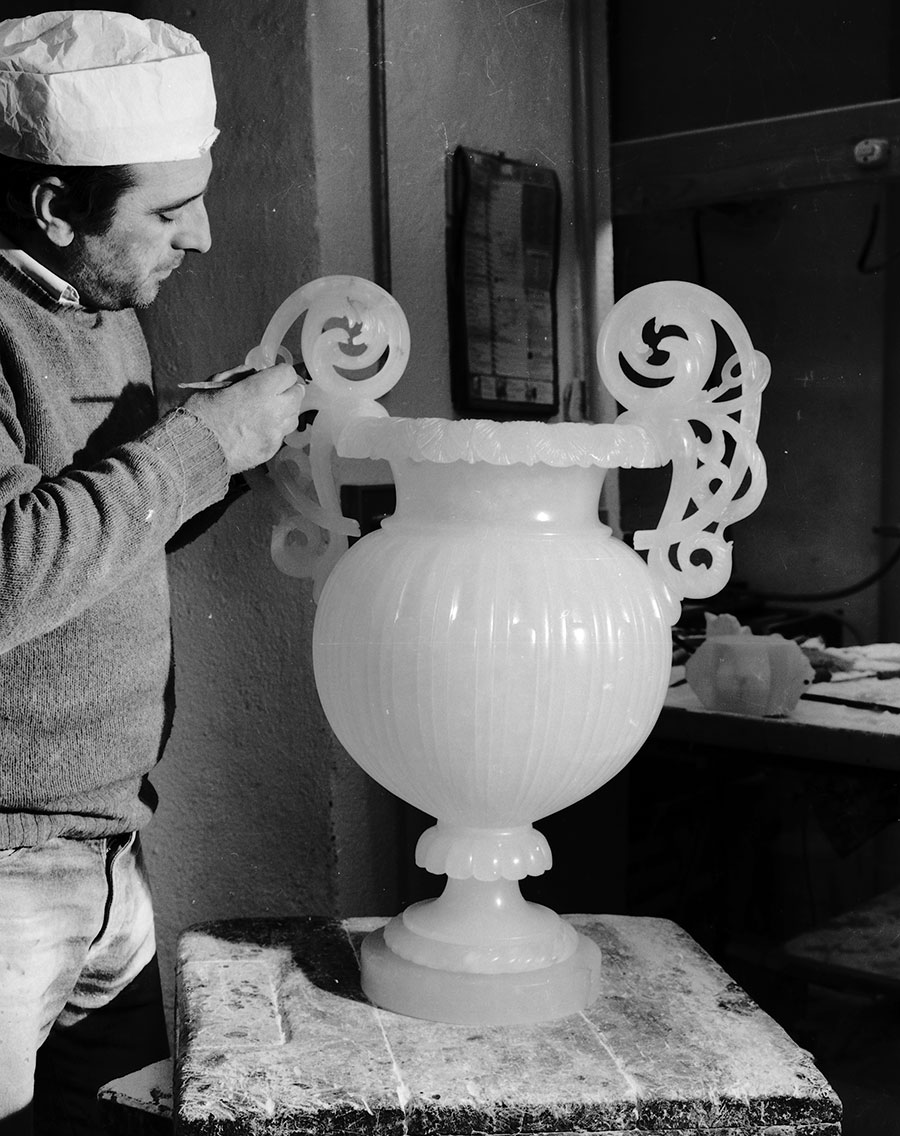 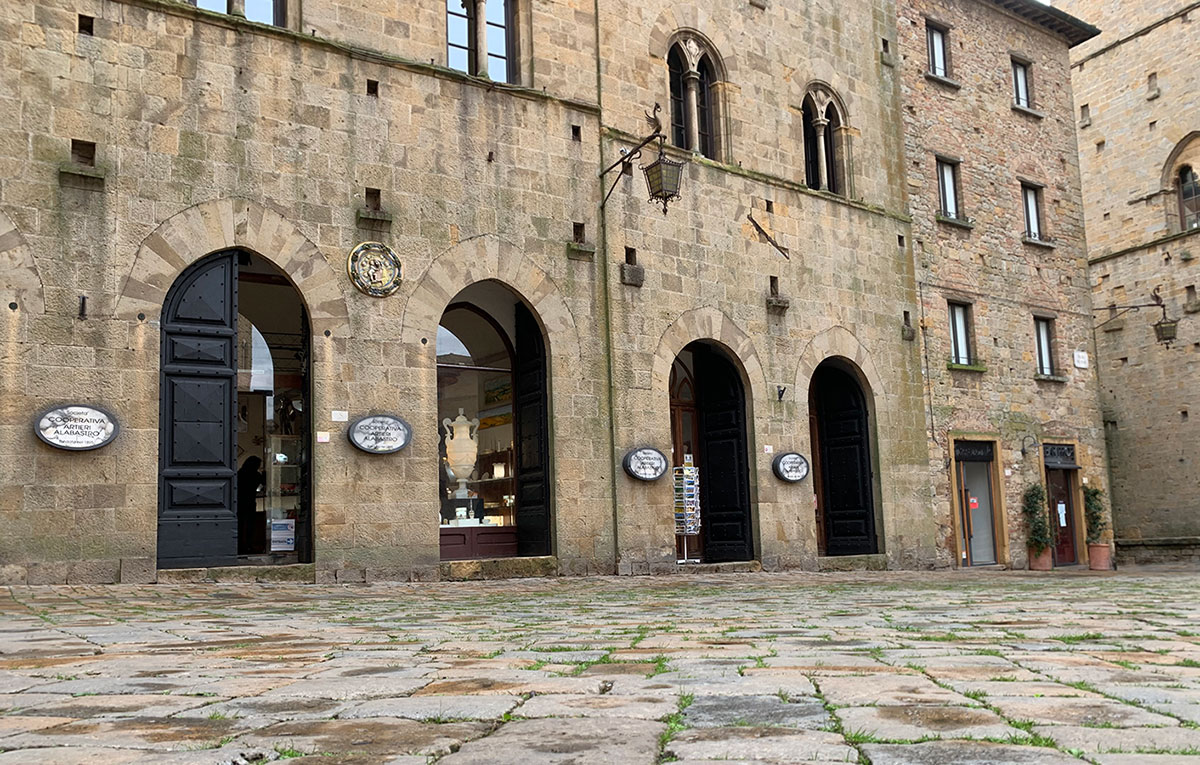